Letter from the Director: Understanding the H1N1 Virus

Novel H1N1 virus, known to be an influenza A-subtype, was originally referred to as “swine flu” because it is very similar to influenza viruses normally occurring in North American pigs (swine).

Flu viruses are mainly spread from person to person through coughing or sneezing. Sometimes people become infected by touching something, such as a surface or object, with flu viruses on it, and then touching their mouth or nose.  Studies have shown that the influenza virus can survive on environmental surfaces for 2 to 8 hours after being deposited, and will be viable to infect another person.  In contrast to the seasonal influenza virus, which affects the elderly more than young individuals, the Novel H1N1 virus appears to be more a disease of the young.  Almost two-thirds of the cases reported were in young adults and children.

The symptoms of the 2009 Novel H1N1 flu virus include fever, cough, sore throat, runny or stuffy nose, body aches, headache, chills and fatigue. A significant number of people, who have been infected with this virus, also have reported diarrhea and vomiting. Severe illness and death have occurred as a result of symptoms associated with this virus. “High risk” of serious complications include:  people 65 years and older, children younger than five years of age, pregnant women, and people of any age with certain chronic medical conditions (diabetes, heart disease, asthma and kidney disease).

People infected with seasonal and 2009 Novel H1N1 flu shed virus, and may be able to infect others from 1 day before getting sick to 5 to 7 days after. This period might be extended in some people, especially children and individuals with weakened immune systems. Several tests can be used for detecting the presence of influenza viruses in respiratory specimens, including: direct antigen detection tests, virus isolation in cell cultures, and detection of influenza-specific RNA by real-time reverse transcriptasepolymerase chain reaction (rRT-PCR). The more definitive tests have their own drawbacks: Viral cultures take up to 28 days to be reported; rRT-PCR used for confirmation of Novel influenza H1N1, takes 5-7 days for the results, and comes with a hefty price tag (costing $390.00 for each specimen submitted).

The CDC in its presentation to healthcare professionals is not recommending rRT-PCR be used in front line screening of individuals and should only be used for surveillance purposes and in some very special situations. 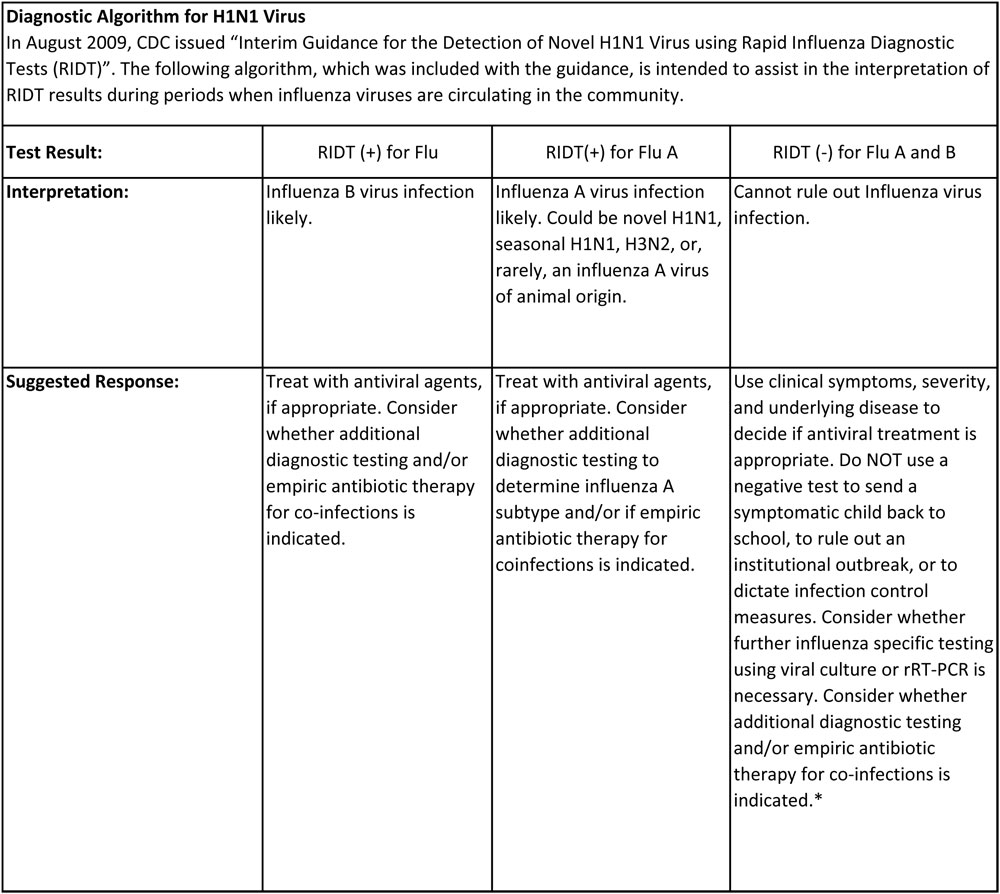 Rapid Influenza Diagnostic Test serves as a rapid frontline screen assay; it is an antigen detection test that detects influenza nucleoprotein antigen. Although this test can detect and distinguish between influenza A and B virus, it cannot distinguish between influenza A-subtypes. Several factors play an important role in the performance of the rapid test, such as the age of the patient (younger patients tend to secrete more influenza virus), and the length of the time the specimen is taken after onset of symptoms.  Few comparisons have been done between rapid influenza testing and RT-PCR.

Based on those comparisons, the sensitivity of these tests ranges were from 10-70%. The assay we use has been shown to detect the influenza A/California/04/2009, A/ Auckland/1/2009 and A/Auckland/3/2009 (H1N1) influenza viruses of swine lineage cultured from a positive human specimen. Accepted samples are nasal wash/aspirates, and nasopharyngeal and/or nasal swabs. Specimens can be held at 2-4°C for up to 24 hours prior to testing; results are reported the same day.

Have a topic you’d want our Lab Director to cover in future posts? Send suggestions to info@aculabs.com!